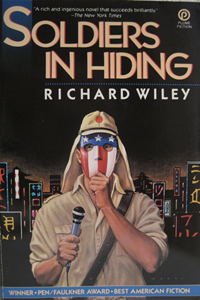 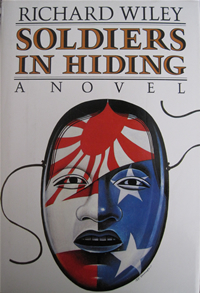 "It gives me pleasure to hinder American tourists occasionally. It is a small pleasure, to be sure, but a real one, and it is so very un-Japanese.'' So goes the opening of Richard Wiley's Soldiers in Hiding, and its mischievousness seems reason enough to go on reading this unusual first novel.

But if there is any doubt remaining, just consider the story that develops from that opening. As the narrator, Teddy Maki, recalls his past, he tells how two young Japanese-Americans from Los Angeles - he and his friend Jimmy Yamamoto - were touring Tokyo with their dance band when the Japanese raided Pearl Harbor. Forced to enlist in Japan's army along with their Japanese agent, Ike, whose sister, Kazuko, Jimmy Yamamoto has married, they wind up in the Philippines sporadically waging jungle warfare against Filipino guerrillas.

For a while, they succeed in steering clear of committed action - ''I know that in the old American war movies Japanese soldiers always seemed adept at jungle fighting, but we were not.'' But then in a series of powerfully drawn incidents, Ike kills a native woman, and Teddy and Jimmy get entangled in a confrontation between their commanding officer, Major Nakamura, and a recalcitrant American P.O.W.

In a couple of scenes that could themselves have come out of an old American war movie, the major, a former elementary-school principal, shouts at the American - who, like Teddy and Jimmy, is from Los Angeles - for standing with his arms akimbo. Teddy tries to intervene by speaking English to the P.O.W. '' 'The major wants you to put your arms at your sides,' I said quietly, looking at the American directly for the first time. 'He feels that your posture is defiant and would prefer that you act the part of the conquered soldier rather than that of his equal.' ''
But all Teddy succeeds in doing is alerting the major to his and Jimmy's divided loyalties. As the confrontation deteriorates, the major orders Jimmy to shoot the American. When he refuses, the major shoots Jimmy and orders Teddy to perform the execution. ''I raised the gun when the major took a step backward, away from me,'' Teddy recalls. ''There was a languid sense of levitation in me and I closed my eyes. I seemed to float. And I did not come back down to earth immediately. Not even with the sound of the report.''

One feels at liberty to give away this much because there is so much more than this to the story, and so much more to the novel than the story. Richard Wiley - who grew up in Tacoma, Wash., spent two years with the Peace Corps in Korea, and then spent five years in Japan studying Japanese language and literature - has achieved a tour de force of compression and impersonation, wresting from his dramatic material a tragicomedy of cultural conflict.

By the time Teddy tells his story he has become Japan's most popular and vulgar television entertainer, the host of ''Teddy Maki's Original Amateur Hour'' (''Does that ring a bell?'' he asks.) He has taken his own rendition of ''Mood Indigo'' as his theme song, the very tune with which General MacArthur used to introduce his speeches when he was running Japan and ''wanted us unhappy in shades of the rainbow the Japanese could not even recognize.'' And he is dedicated to reducing Japanese culture to the lowest denominator it shares with America, as if to parody Japan's response to the West and to mock the ambiguity of his own situation.

Mr. Wiley's touch is not infallible. The scenes in which Teddy's wife gives birth to their son during a bombing attack are a little too fraught with symbolism, as is Teddy's fixation on the scars of a bar-girl who carries ''the shadow of bomb burns'' from her childhood in Hiroshima. The statement, ''I became the central raiser of my child'' seems needlessly clumsy, especially coming from a source that elsewhere describes himself as being ''like a man on a rotisserie turning evenly but thoughtlessly through time,'' or who describes with relative grace the co-conception of that child by himself and Jimmy Yamamoto: ''And as my seed set sail on its miraculous voyage I saw, in the cat's cold eye, that I was bathing the growing baby with the ingredients of myself and that he would be a mutation, a hybrid: Jimmy's boy but Teddy Maki's too.''

Yet such lapses seem minor in the light of all the dazzling effects Mr. Wiley pulls off, from a scene in which a Buddhist monastery burns down to the parody of a Christmas visit with which the novel ends. That ending is a showdown between Teddy Maki and Major Nakamura intended to expose the major's war crimes. But nothing turns out as planned, and the threads of the novel's complex themes are twisted into a surprising new pattern. By this time we've entirely forgotten that it is an American who wrote Soldiers in Hiding. At least to a Western ear, it is the voices of Japanese culture and history that are so dramatically declaiming.